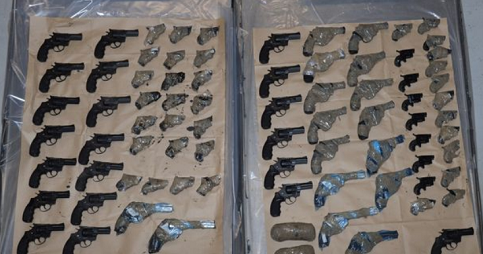 A lethal arsenal of 79 firearms have been seized on the way to UK just outside the Channel Tunnel.

The collection of 79 “viable” 4mm and 6mm handguns and a large quantity of ammunition were in concealed compartments in a trailer attached to a Mercedes van.

The weapons were hidden in specially adapted concealments in engine blocks.

Detectives believe the weapons had been smuggled from eastern Europe to be sold to organised crime gangs across Britain.

Police described the seizure as “very significant” and one of the largest of its kind.

But it represents only a tiny percentage of the illegal weaponry being imported in to the UK and comes amid a backdrop of rising gun crime in Britain.

Graham Gardner, NCA Deputy Director of investigations, said: “This joint operation has resulted in a large number of viable firearms being taken out of circulation before they could reach the UK.