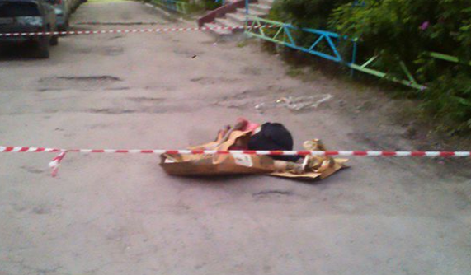 A dead mother was found decomposing on the street after her son dumped her on the side of the road because he couldn't afford to bury her.

The unnamed 70-year-old had 'fluids oozing from her body' after being left by her unemployed son, 30, who had initially kept his mum for three days in his flat.

When the body began to decay, the man decided to take his mother's body to a street in the city of Saratov, in Russia 's Saratov Oblast region.

The jobless man left his mother covered in boxes on a dolly, having wheeled her out into the street to rot by the side of the road.

But the platform with wheels was subsequently stolen by a thief, and the elderly woman's body thrown into the middle of the road.

Shocking pictures show the abandoned body lying in the middle of the street, clearly decomposing.

Bodily fluids can be seen 'oozing' from the unidentified woman who has newspapers wrapped around her feet.

Police launched an investigation after her body was discovered at 3am.

They believe she died on Thursday and they are currently carrying out an autopsy to identify the cause of death.

It is proving a difficult task for the authorities because the body is already badly decomposed.

It is unknown whether the son, who lived off his mum's pension, has been charged. 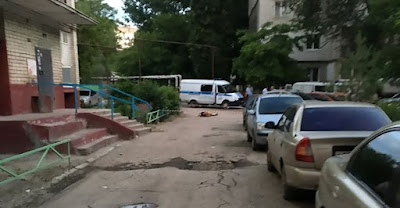