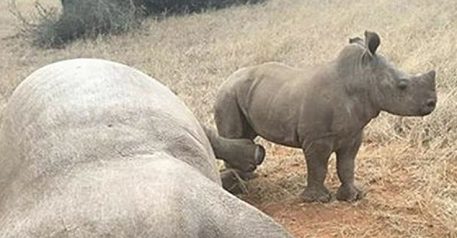 Six rhinos were shot and butchered for their horns in just one night on a South African reserve.

Poachers targeted the animals in KwaZulu-Natal's flagship Hluhluwe-Imfolozi reserve over the weekend.

At least 11 gunshots were heard during Sunday night, and when rangers went out to search in daylight they discovered a bloodbath.

Six rhinos were dead and all had their horns hacked off, News24 in South Africa reports.

A heartbreaking image revealed one mother rhino had been killed, leaving her baby orphaned.

Veterans Empowered To Protect African Wildlife, an anti-poaching charity, said 17 rhino were killed in in Southern Africa and Namibia over the "terrible" weekend.

Banned since 1977, the illegal trade in rhino horn continues to be a major global problem.

Hundreds of thousands of rhino once roamed the plains of Africa and Asia.

According to News24, this week's slaughter brings the total number of rhino killed by poachers in KwaZulu-Natal reserve to 139 this year. 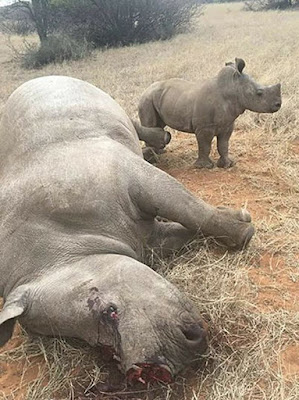