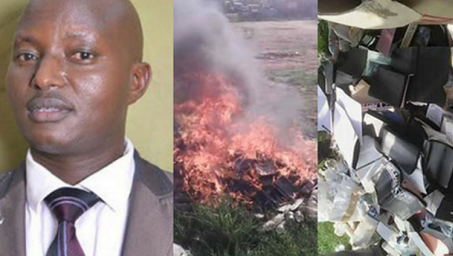 A Ugandan Magistrates’ Court has summoned a pastor, Aloysius Bugingo of the House of Prayer Ministries International to appear and defend himself on why he recently set on fire, a heap of Bibles.

According to Wameli Anthony Yeboah, the lawyer representing Aloysius Kiiza Matovu and Evangelist Semugooma Francisco who dragged the Pastor to court, Pastor Bugingo was served the summons on Tuesday evening.

“It is criminal for him to burn Bibles because it goes against the constitution which guarantees freedom of worship and he is abusing the objects of worship which include Bibles, Qurans, rosaries and any other items people may choose to use during worship,” Wameli said.

He added that they need a restraining order against Bugingo because they have reliable information that the pastor has continued burning more Bibles every day.

The core reason for burning the aforementioned version of the Bibles was that they bore the words ‘Holy Ghost’ as opposed to ‘Holy Spirit.’

It’s further alleged that before Pastor Bugingo could set ablaze the aforementioned Bibles, he reportedly told his flock that King James Version and the New Testament, were tampered with and that some verses were omitted without explanation.

He cited the lines talking about the fasting and Lent which he said were deleted through unclear circumstances and that the word “Holy Ghost” appears 99 times yet the word “Holy Spirit” appears only seven times.