Attempted Murder: I Have No Case With Police, Says Kashamu 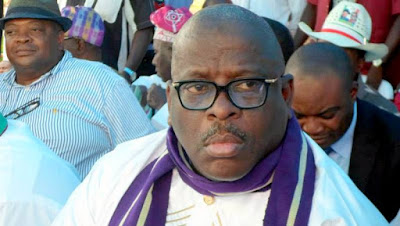 The lawmaker representing Ogun East senatorial district, Senator Buruji Kashamu, said on Saturday that he had no case with the Nigeria Police over his alleged attempt to murder a member of the House of Representatives from Ikene/Shagamu/Remo-North Federal Constituency, Oladipupo Adebutu.

Kashamu told Sunday Punch that the police had absolved him of the allegation.

A Federal High Court in Abuja had on Thursday said Kashamu should submit himself to the police for investigation into the matter.

Delivering judgment, Justice Nnamdi Dimgba ordered that the senator must honour all invitations by the Special Investigating Panel set up by the Inspector General of Police, Ibrahim Idris, to investigate the allegations contained in Adebutu’s petition.

Justice Dimgba, who rejected all the principal prayers of the plaintiff, noted that the senator was duty-bound to appear before the police panel which was also investigating his counter-petition against Adebutu.

But the judge ruled that any attempt by security agencies, particularly the police and the Department of State Services to capitalise on the said investigation by arresting the senator, incarcerating him and transporting him to the United States of America to face illicit drugs charges would be unlawful.

Kashamu, however, told Sunday Punch that Idris had forwarded Adebutu’s petition, which alleged that there was an attempt by the senator on his life during the convention held by the Peoples Democratic Party in Port Harcourt on August 16, 2016, to the Rivers State Police Command.

He said the police in the state had investigated Adebutu’s allegation and found it to be untrue. He added that since the police cleared him, there had not been any invitation from the security agency to him on the matter.

Kashamu said, “After Adebutu filed his petition, I was not invited by the police. Up till now, I have never been invited based on his petition. Rather, the IGP assigned the investigation to the Commissioner of Police in Rivers, based on the fact that the alleged crime was said to have been committed in Port Harcourt.

“Policemen from Rivers came to my Abuja office to interrogate me. They took my written statement.

They also went to the hotel where Adebutu claimed I made an attempt on his life and the owners said there was no such incident at the place during that period.

“I wrote to request for the outcome of the investigation and the interim report was given to me and it exonerated me. I still have the report with me and I have not been invited by the police after the investigation.

“Adebutu did not win any court case against me. The judge only interpreted the provisions of the constitution that it is compulsory for me to surrender myself when invited by the police and that the police was empowered to invite me or anybody. But other allegations in the suit were dismissed.”

The senator said it was based on Adebutu’s media interviews on his alleged drug-related crime in the US and the lawmaker’s alleged sponsorship of his extradition that he filed a fundamental human right case against Adebutu.

Adebutu had alleged in his petition dated August 22, 2016 and addressed to the IGP, that the senator had, along with some thugs, made an attempt to murder him during the PDP’s convention.