Man Stabs Co-Tenant For Advising Him To Stop Smoking Hemp 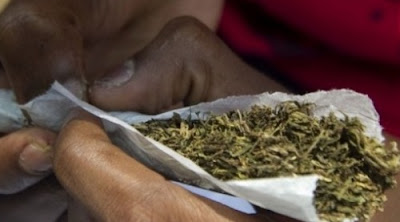 29-year-old trader, Ndubuisi Oni, who allegedly stabbed a co-tenant, one Joseph George, with a broken bottle on the stomach, was on Monday brought before an Ikeja Magistrates’ Court in Lagos.

Oni, a resident of Oke-Odo area of Ikeja, is standing trial on a charge of grievous harm. The prosecutor, Sgt. Mike Unah, told the court that the accused committed the offence on June 15, at their tenement building.

Unah alleged that the accused assaulted the complainant by beating him up and stabbing him with a broken bottle on the stomach.

“The complainant claimed that the accused stabbed him because he told him to stop smoking Indian hemp in the compound. “George said efforts made by other tenants to settle the dispute were unsuccessful.

“After the incident, the complainant was immediately rushed to the hospital, while some other tenants apprehended Oni and took him to the police station, where he was subsequently arrested,” Unah said.

The offence contravened Section 245 of the Criminal Law of Lagos State, 2015 (Revised).

The section prescribes a seven-year jail term for offenders.

The accused, however, denied the charge.

The Magistrate, Mrs A.O Gbajumo, granted the accused bail in the sum N200, 000 with one surety in like sum.

The case was adjourned until July 31 for mention.