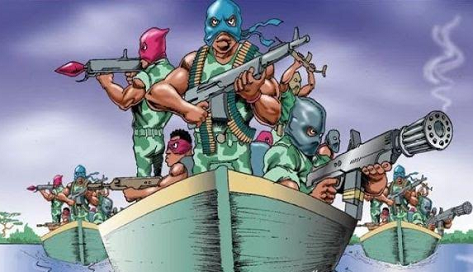 Note: This wasn't written by Ladun Liadi. It is quite sad that at a time when patriotic indigenes of the Niger Delta region are working with the Federal Government, to correct some imbalances in the long-neglected region, a few unscrupulous elements are trying to tarnish the reputation of well respected personalities who have made good names for themselves over the years, all because of greed and self-benefits.

These persons, known in the Niger Delta as men of questionable characters, have been all out in the online media, sponsoring fictitious sites and imaginary protests. They even engage in attacks against the office of the Minister of State for Petroleum, Coordinator of the Presidential Amnesty Program (PAP), the head of the NDDC, just to mention a few.

The blackmailers' antics have been exposed by well-meaning indigenes of the region, who are happy with the efforts of heads of the government offices they've been accusing of all sorts through a phony site known as Niger Deltans For Accountability & Good Governance.

The blackmailers ignorantly accused Gen. Paul Boroh of mismanaging N60Billion from October 2015 to June 2017 as Special Adviser to the President on Niger Delta Affairs & Coordinator of Presidential Amnesty Program. But official records show that the PDP man who was in-charge of same office got as much as N65Billion for just a year. Who is fooling who?

The blackmailers ignorantly claimed that Gen. Boroh has added as much as 4,000 Ghost Names to the list of Ex-Militants receiving N65,000 stipends monthly. What they didn't know is that, same list has been prepared and concluded since 2013, and lodged with the CBN. Hence, no additional name can be added to the list.

Interesting, many Niger Delta stakeholders are now aware of the lies and gimmicks being peddled by the blackmailers in their desperate bid to extort money from people serving the region and Nigeria in different capacities. In fact, a positive group known as Niger Deltans Against Greed & Gimmicks, with a website known as ndagg.com has revealed that UDENGS ERADIRI, a known face in the Niger Delta and Ijaw Youth Council, is one of the top blackmailers in the region.

How true are their revelations? The website, whose agenda is to expose those who are out to extort money through blackmailing people working to better the lot of the entire Niger Delta region, has made some strong revelations about him and others.