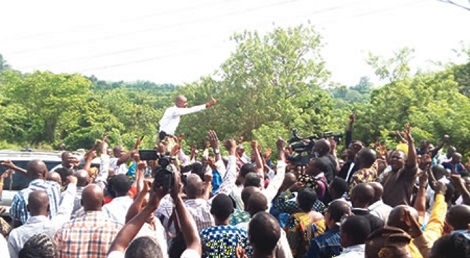 A series of protest by workers and students of the Obafemi Awolowo University, Ile Ife, Osun State, yesterday forced Justice David Oladimeji of an Osun State High Court sitting in Ede to reverse a ruling he gave that an ex-Acting Vice Chancellor of the university, Prof. Anthony Elujoba, be remanded in the Ilesa Prison.

Following the refusal of angry workers and students of the university to leave the court premises despite the heavy presence of policemen, the judge reversed the earlier order and ruled that Elujoba should be remanded in the custody of the Economic and Financial Crimes Commission.

Counsel for the accused, Ibrahim Lawal, who came to announce the reversal to the protesters, said the judge had also shifted the adjourned date from July 19 to 14 for ruling on bail application.

Elujoba and bursar of the university, Aderonke Akeredolu, who are being prosecuted by the EFCC for alleged corruption, were arraigned on Friday and the judge ruled that the two accused persons should be remanded in the EFCC custody.

He adjourned till Tuesday for ruling on their bail application.

At the Tuesday sitting, the judge ordered that Elujoba should be remanded in prison.

The order created pandemonium on the court premises.

The workers and students blocked the road leading to the court with buses, while some of them surrounded the court premises and vowed not to allow Elujoba to be taken to the Ilesa Prison.

They also threatened to occupy the Ilesa Prison if Elujoba was eventually taken there.

The ex-acting vice chancellor is being prosecuted by the EFCC for alleged corruption.

Elujoba was said to have brought peace to the OAU by paying workers allowances totalling over N1bn.

Elujoba acted for less than a year after the turbulent tenure of the immediate past substantive Vice Chancellor, Prof. Bamitale Omole, ended.