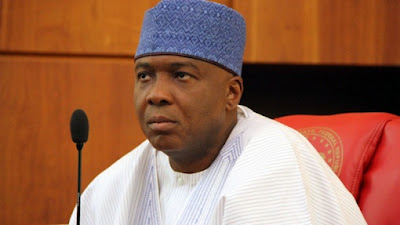 The president of the Senate, Bukola Saraki, has urged Nigerians to be calm over the new nine-year Basic Education Curriculum that had stirred controversy among religious bodies.

Mr. Saraki made the call Wednesday while receiving a delegation of the Christian Association of Nigeria, CAN.

He assured the delegation that the Senate Committee on Basic Education would investigate the complaints by the association on the curriculum to make it acceptable and satisfactory to all religions.

Mr. Saraki said the process began in 2010 when the administration of former President Goodluck Jonathan came up with a series of reforms. “This is with a view to reduce the number of subjects in school curriculum,” he said.

“As leaders, we must continue to seek and find solutions to problems.

“You will remember that in 2010, the past administration came up with reforms on how to reduce the number of subjects at the basic education level.

“There were about 20 subjects at that time, and subsequently they were reduced to 12.

“In the process of implementing those reforms, we have this problem. Why I am saying this is so we don’t leave here and believe that it was done to favour one religion over the other.

“Now the reform is clearly not working. So our responsibility is to look into that reform and make it work.

“I am sure that there was no intention to make one group feel disadvantaged with this new school curriculum.

‘’This is why this Senate will direct our Committee on Education to look at the reform and find out why it is not working with the relevant stakeholders,” he said.

Earlier, the leader of the delegation, Charles Adisa, called for the intervention of the National Assembly to ensure genuine respect for Nigeria’s Constitution.

Mr. Adisa, who represented, the CAN national president, Samson Ayokunle, said: “We also call for the abolition of obnoxious laws that infringe on freedom of worship.”