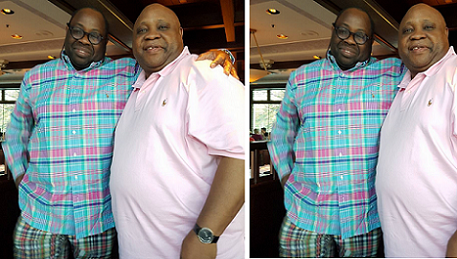 Wait! Need we say these people ‘fight’ outside and settle behind? Yes they may be friends but have you forgotten the story of their children? Senator Adeleke is Davido’s uncle while Dele Momodu is Sophia Momodu, Davido’s first babymama’s uncle as well. Recall that Mr Momodu had a showdown with Davido’s dad at the airport when he alleged they wanted to sneak Imade to Dubai? And even pressed buttons insisting no big man can oppress him saying nobody is above he law? Lol. Well, we cant say his bestie, Senator Ademola Adeleke didn’t know about all these dramas, he must have stepped in and probably took sides, but today they are back together, lol. And ofcus without been told he must have played a major role in bringing Davido and Sophia back together, if not for marriage, well for their child!

So here is what Dele Momodu wrote about his bestie being the latest Senator in town;

If anyone had told me three months ago that my dear friend DR ADEMOLA NURUDEEN ADELEKE would soon become the most popular politician in Nigeria, I would have said IMPOSSIBLE... Ademola had visited my hotel in Atlanta, Georgia, shortly before the sudden death of his older Brother SENATOR ISIAKA ADELEKE whose Governorship comeback he wanted me to support... But man proposes and God disposes. Today, Ademola has virtually taken over the global cyberspace with a vengeance as he's sworn in as a Senator of the Federal Republic of Nigeria, thus replacing his Brother! May God bless and protect him always...