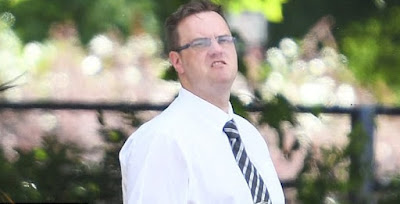 A man killed his elderly mother after they had a row over Christmas potatoes, a court heard. Mark Jennens, 40, appeared at Wolverhampton Crown Court yesterday accused of the manslaughter of his mother Hazel, 78, after they allegedly had a row about Christmas dinner.

The court heard he tried to throw her out of a house they shared in Brierley Hill, West Midlands, after she criticised his efforts at making dinner on Decemeber 24, 2015.

It is alleged that Jennens frogmarched his mother, who had osteoporosis and lung cancer, to the door, fracturing her hip. She later died from bronchopneumonia in hospital. According to a 999 transcript read out during the trial, Jennens told operators: 'After being told I'm stupid for trying to sort Christmas dinner out I just lost it and went to chuck her out of the door.'

Yesterday Ms Rachel Brand QC, prosecuting, said: 'They argued about potatoes. He got angry, threw a writing pad across the table. He said "that is the last time you speak to me like that".

'She responded to that by leaning forward and gritting her teeth. He panicked, went to the arm chair and picked her up and frogmarched her to the door to get her away from him.

'His intention was to put her outside and slam the door. He held her arms, then she was on the floor.'

'After undergoing surgery at Russells Hall Hospital, she began making a recovery, but on January 18 she fell unwell and died two days later at the hospital.

'They have an argument and in the course of it he pushes or throws her to the floor.'

She added: 'A fractured hip led to her being in hospital, it was that which caused the need for her to have surgery, to the risk of respiratory problems, bronchopneumonia which led to her death.

'A cascade of events all led from a fractured hip which she suffered at her son's hands.'

Jennens had been the sole carer for his mother for ten years and was taking antidepressants at the time of her death.