R. Kelly: Alleged Captive Speaks Out, Says I Am FINE 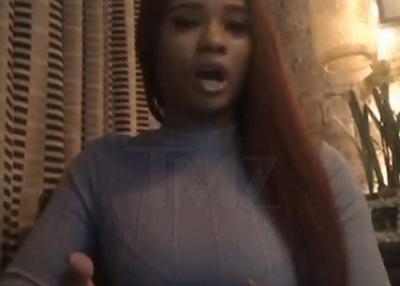 The woman whose family claims R. Kelly is holding in a "cult" has a message for the world - she's totally happy and okay, although she's keeping her whereabouts under wraps.

TMZ spoke to Joycelyn Savage, the 21-year-old whose father, mother and sister held a news conference yesterday (good family) to accuse Kelly of essentially making Joycelyn and other women his sex slaves, but she claims she's exactly where she wants to be. She says she still gets texts from her parents, but explains why she's cut off all communication with them.

Still, there was a lot she wouldn't address, such as where she is now, or exactly what her relationship is with Kelly.

Kelly has denied the accusations and hinted he might take legal action against the Savage family.

Joycelyn's father, Timothy, believes his daughter is experiencing Stockholm Syndrome, so, it's doubtful he'll buy what she has said.

But hey, if you are not doing anything with her, then let her go! If she says no, tell her you can't dent my image, I am only trying to help, leave my house! It's sad a thing like this came up in the past with Kelly and now it's coming back? What happened to the angelic I Believe I Can Fly star, the one that gave us Thoia Thoing that got everyone dancing like a snake? Lol. Abi you didn't dance like those vixens? Lol. Hoping these all turns out false.