PDP To Lai Mohammed: You, Buhari, Are The Authors Of Hate Speeches 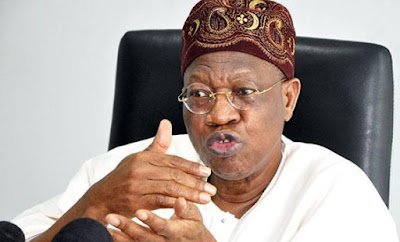 In a press statement signed by the National Publicity Secretary, National Caretaker Committee of the PDP, Prince Dayo Adeyeye, the party expressed shock at the Minister’s outburst even as it described the statement as another lie from Alhaji Mohammed.

“The Leadership of the Peoples Democratic Party (PDP) is taken aback over the recent vituperation by the Honourable Minister of Information and Culture, Alhaji Lai Mohammed in which he accused opposition in the Country as being responsible for hate speeches, disinformation and fake news. How convenient! This is another lie from Lai Mohamned!!

“Mr. Minister is invited to review his past speeches/statements as Spokesman of opposition ACN/APC and then he will agree with us that the APC leaders/members are the architects and sustainers of hate speeches in our dear Country, Nigeria,” the PDP scribe wrote in a statement.

Adeyeye further said the Minister ought not to forget easily that in the past, he similarly took on the ruling party while he was in the camp of the opposition.

“In case Lai Mohammed has forgotten, let us remind him and his Parties, the ACN & APC that in their desperate quest to grab power by all means, organized and carried out series of campaigns of calumny as opposition designed to mislead the public, discredit the person and Office of past PDP led administrations especially, that of the immediate past President, Dr. Goodluck E. Jonathan, GCFR in order to cause disaffection amongst Nigerians against his government.

“Alhaji Lai Mohammed as the Spokesman of ACN at a press conference in April 2013 raised a false alarm alleging that the Federal government of Nigeria under President Jonathan had awarded an oil pipeline protection contract to serve as a smokescreen in funding activities that would create chaos in the South-West region.

Of course, it turned out that no such contract was ever awarded by the Jonathan Administration. “Still in April 2013, the ACN Spokesman now Minister of Information and Culture, Alhaji Lai Mohammed mischievously alleged that President Jonathan had issued a Presidential Directive targeted at witch-hunting the Former Governor of Lagos State and Leader of the ACN , Bola Tinubu in order to stop the Merger of the Party with other political parties.

This also turned out to be a hoax,” the statement continued. The PDP also added that apart from the Minister, other prominent members of the APC also made speeches capable of causing disharmony in the land prior to the 2015 polls.

” Also before the 2015 General Elections, the Chairman of APC, Chief John Oyegun in November 2014, vowed to form a parallel government if the elections were rigged. His statement was later re-echoed by the Presidential Campaign Director-General of the APC, Mr. Rotimi Amaechi, and now Minister for Transport,” the statement noted, adding that “talk about distractions, intimidation, harassments and hate speeches defines the APC leaders and members.

“Let us not forget the Infamous inflammatory statements by General Muhammadu Buhari that caused wide spread violence and killings of Nigerians in the 2011 General Elections. The General repeated almost the same statement on the 14th of May 2012 in Kaduna State when some CPC members from Niger State paid him a visit.

He was quoted to have incited his supporters saying “…if what happened in 2011 should again happen in 2015, by the grace of God, the dog and the baboon would all be soaked in blood.’’

Till date, President Muhammadu Buhari has neither refuted the statement nor offer any explanation for it.

What could be more hateful than such a call for pogrom or mass murder of innocent Nigerians? The list of such hateful and inciting speeches by the APC leaders and especially their erstwhile spokesman is endless. It was a period of one lie, one day. All in the desperate bid to grab power at all cost. Now that they have the power,they don’t know what to do with it,” wrote Adeyeye lamentably.

“Lai Mohammed and indeed any of the APC leaders for that matter are not in the position to teach any lessons on appropriate public speeches. They should first apologize to Nigerians for their serial lies, inciting and hate speeches with which our people were deceived into believing that they had something to offer.

They should then undergo the serious ritual of self purgation without which there will be a constant relapse into their goebbellian tactics as we continue to witness. It is so ironic that those who haul mud at people do not ever want sand thrown at them. If you are not ready to take the heat you better leave the kitchen,” it stated.

“Our advice to the APC Government is that it should concentrate on doing the business of the people and to endeavour to speak the truth always. Lies can take you thus far but in the end it cannot be an alternative to the truth,” wrote Adeyeye.