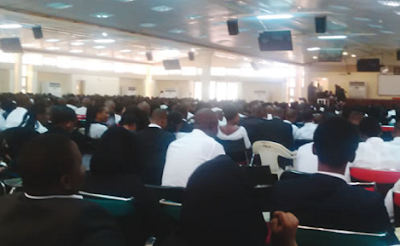 The Nigerian Law School, Bwari, Abuja, has expelled a student, Kayode Bello, after he allegedly had an argument  with a fellow student, identified simply as Chidima, over seat reservation in a lecture room.

The graduate of University of Ibadan, Oyo State, was reportedly bundled out of the school’s library by law school officials and policemen attached to the Bwari Police Station on the day he was expelled.

Punch Metro learnt that Bello’s issue with the school management started shortly after he gained admission into the institution in November 2016.

It was gathered that he complained to the Secretary to the Council of Legal Education, Mrs. Elizabeth Max-Uba, over the leakage of the sewage pipe in his room’s toilet.

He said he also reported to the secretary that the water system in rooms in the hostel was not functioning, adding that his complaints were not attended to.

The 34-year-old told Punch correspondent that the events that led to his expulsion started on March 15, 2017, when he went to the class for a morning lecture.

“The class is usually overcrowded. There are no enough chairs in the lecture room and we have issues over seat reservation. At a point, the Head Marshal, Mr. Akinyemi, announced publicly that there should not be seat reservation again because it was causing problems.

“That day, I met Chidima and other persons sitting on some chairs. There was a book on a vacant chair. As I made to sit on the vacant chair, Chidima said she was keeping the seat for a student. I said I would leave when the person came.

“When the lady came 20 minutes later, Chidima angrily told me to vacate the seat. I told her that her approach was wrong. In the process, a marshal came and took both of us to Mr. Akinyemi’s office.

He asked me to look for another seat. I made him to realise that he was the one that gave an order on seat reservation, but he ignored me.

“I went to report the matter to the school’s Chief Security Officer, Mr. Ogunboyan, but he was not in the office. I called him on the telephone and he asked me to be patient, saying he would address it when he came back.”

Bello said the CSO took him to Akinyemi later that day and the Head Marshal complained that he (Bello) was rude.

“I said I was not rude, but was trying to let him (Akinyemi) realise that he didn’t do justice to the matter brought before him,” he added.

Bello said both officials flared up at that point and Akinyemi threatened him with a query. He stated that he immediately submitted a petition on the issue at the secretary’s office, adding that she did not acknowledge it.

He said he also sent the same petition to the email of the Nigerian Law School without getting a reply.

He said Akinyemi announced the query in the class the following day and gave him a copy, which he replied to.

“I also made my response known to the class. He issued the query and signed it on behalf of the Dean of Students’ Affairs, which is wrong,” Bello said.

He said the officials suddenly turned the matter against him, accusing him of inciting students against the school management, adding that his room was inspected on March 20, but nothing incriminating was found.

Bello explained that the Students’ Representative Council was also influenced to issue a disclaimer against him.

“On March 21, the CSO and the Head of Academic Affairs, Mr. Osamolu, came to my room in the midnight and forcefully evicted me. I paid over N300,000 as school fee, of which N60,000 was for hostel accommodation. They handed me over to policemen at the school’s police post. When I explained what happened to a policeman, he was surprised. He gave me a space to pass the night.

“When I returned to the hostel the following day, I met the door of my room broken, while my bed had been taken away. I reported at the Bwari Police Station, but a policewoman I met there requested money to buy a case file, which I declined to provide.

“My lawyer wrote to the secretary about my victimisation, but she didn’t reply. I also petitioned the Public Complaints Commission, which wrote to the Nigerian Law School.

“The SRC later withdrew the disclaimer privately, but they had endangered my life and allowed the school management to capitalise on it. I said the SRC chairman should resign as a punitive measure for the disclaimer, while a fresh committee be set up to look into my case. They said it was not possible for the chairman to resign.”

He said he kept sleeping in the open room until they went for externship (attachment to law firms and courts) in April 24, adding that his application for hostel accommodation during the programme was rejected by the school.

He said, “We returned from externship on July 12. I was in the library on July 17 preparing for Portfolio Assessment which started the next day when the CSO led some people to give me a letter of expulsion to sign. I rejected it. They called for reinforcement and I was dragged out of the library and taken to the Bwari Police Station, where I had earlier lodged a complaint against the school without any action.

“They said they would charge me to court; I was happy. I was detained. They later released me after I signed an undertaking that there would be peace.”

The representative of UI graduates in the SRC, Patrick Oyakhare, confirmed to our correspondent that the SRC regretted issuing the disclaimer.

“I met with Kayode (Bello) to tell me what he wanted. He said the committee that sat on his matter should be reconstituted while the chairman should resign. I presented it at a meeting. The first condition was agreed to, but it is not possible for the chairman to resign. It is only the school that can comment on his expulsion,” he added.

Some students, who spoke on condition of anonymity, said Bello was expelled because the school authorities saw him as a threat.

A student said, “Kayode is 100 per cent right about his complaints over the poor state of the facilities in the school. All the students are aware, but no one has the confidence to challenge the school. It is just unfortunate that Nigeria is a country where it is difficult to fight an institution and win.”

Another student described the fate of students in the institution as “a baby that is being spanked, but dares not cry.”

“You can come to the school to see the state of the facilities yourself. Bello may be blamed for challenging the school authorities, but he was fighting for a right course,” he added.

When contacted on the telephone, the CSO directed our correspondent to the Secretary to the Council of Legal Education.

Asked what actually led to Bello’s expulsion, the Secretary, Max-Uba, said the management would issue a statement on the issue on Monday (today).