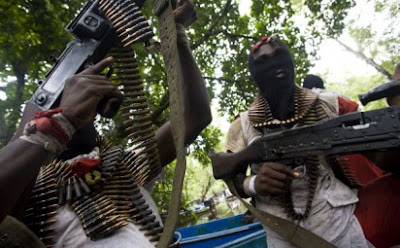 Suspected militants and pirates, last week, in Akwa Ibom State, abducted several market women, whisked them to their hideouts in the creeks, where they forced them at gunpoint to take their clothes off, defiled and took several pictures of their womanhood with their phones.

NDV learned that the women from different communities in the state and neighbouring Cross River State were returning from Nwaniba community market in Uruan local government of the state when over 10 masked men ambushed the two speedboats separately conveying them, commandeered them to their camp.

They dispossessed them of their money and other valuables in the den before humiliating them.

Reports said the women were heartlessly beaten and sexually abused by the gangsters, who inflicted machete cuts on the women that refused to succumb to their inordinate sexual desire.

They removed the outboard engines of the two speedboats that carried the women and fled their camp, leaving them behind.

No official complaint yet— Police

The Police Public Relations Officer, PPRO, DSP Chukwu Ikechukwu, said: “Failure of the community to file the matter with the Police in the area was hampering investigation and action on the problem.”

He, therefore, advised the public to always volunteer information on crimes and criminal elements to security agencies for prompt action. Contacted on the matter, the Divisional Police Officer, DPO, in-charge of the area, Superintendent of Police (SP), Sunday Effiong, who described the incident as pathetic, also said that it had not been reported to the Police.

We were sexually abused —Mrs. John

One of the victims, Mrs. Christiana Sunday John, who spoke through an interpreter, lamented amid tears: “We were badly treated, our womanhood was abused. I joined the second speed boat going back home when midway into our journey; another speed boat from nowhere blocked us.

”To my greatest surprise, the boat was conveying over 10 hefty masked men, two of the armed masked men jumped into our boat and ordered the boat operator to take to one of their camps in the creeks. The two armed men robbed the twenty five (25) of us on board the speed boat before we got to their destination.

“At the camp, they forced us to pull-off, we were forced to pull everything to the pant and they asked at gunpoint to expose our private parts while they took several shots with their camera phones,” she asserted.

Mrs. John further disclosed: “After the dehumanizing experience, they left us. Most of the women, who initially proved stubborn, went home with machete cuts. Two boats loaded with women returning from Nwaniba Market were attacked. After their evil operation, they removed the boat engines, living us stranded in their camp. They collected N70,000, which was all I had on me, now I do not know how to start all over again.”

Chairman, Nwaniba Village Council, Elder Samuel Jeo, who confirmed the incident to NDV, said the saddest thing was that mothers and wives of our men were forced to dance nude while they were being filmed, adding: “This is the most embarrassing criminal operation in Nwaniba. We built that market with community effort, now militants have closed down the market.

“No customer would want to come here and risk his or her life. The market was built two years ago, now we cannot generate revenue because of the effect of militancy and pirates who are terrorizing the area on a daily basis,” he stated.