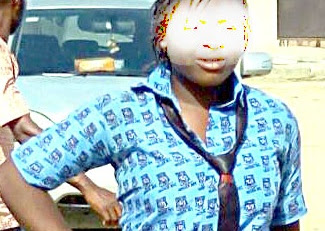 A 14-year-old girl, Obiamaka Ngozichukwu Orakwe, was raped to death in her parents’ apartment in Abule-Ado area of Lagos State by miscreants.

The act was reportedly carried out by a group of miscreants, who usually hanged out in a smoking joint in the area, following the deceased’s negative response to their advances.

Tragedy, as gathered, occurred last Monday, while the Junior Secondary School 3 student was alone at home. The miscreants were said to have gained entry into Orakwe’s apartment from the back of the house, scaling the fence.

They were said to have gagged her, took turns to rape her and, thereafter, abandoned her in a pool of her blood.

Her distraught mother said she was contacted on phone by residents, who saw the miscreants leaving the building through the fence.

Curious residents were said to have knocked several times on the gate to ascertain the miscreants’ mission, without any response from within.

On arrival, Mrs Orakwe reportedly opened the gate with a spare key, only to find her daughter in a pool of her blood in one of the rooms, gasping for breath.

Mrs Orakwe said: “When I asked her what happened, she said it was those boys she had told me about. We rushed to the hospital, where she was confirmed dead.”

A relative, who spoke to Vanguard on phone, said the deceased refused to join her siblings to spend the holiday at her uncle’s place in Lekki, saying “ she would like to stay at home to assist in the house chores.

“Before the incident happened, she complained that some boys, who smoke Indian hemp in the area, were making advances at her, which she turned down.

“They must have targeted when her parents usually leave for work before storming the place. She has been buried at Berger Cemetery.”

The incident, as gathered, has been reported to the Police. Police sources at the Command Headquarters hinted that investigation into the incident had commenced.

According to the sources, “efforts are on to arrest the perpetrators of the dastardly act. We will notify the public when this is done.”