How Kidnapped Epe Students Were Saved, The Kidnap Lord That Died, How Ondo Government Intervened 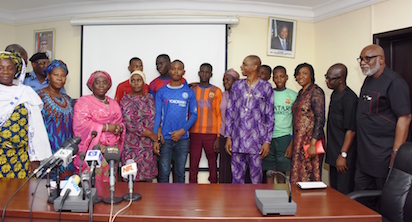 Like most high-profile kidnap incidents that had recently taken place in Nigeria, yesterday’s release of six Senior Secondary School Students of Lagos Model College, Igbonla, Epe, who were abducted on May 25, 2017, did not just happen as simple as it sounds.

It was a-64 day episode that was characterized by pains, anguish, trauma, drama, suspense, surprises, hard work and even death.

The abducted girls, Police, parents of abductees, governments of Lagos, Delta and Ondo states and even the public had their share of the aforementioned factors that played out.

Coming on the heels of the successes recorded with the killing of kidnap kingpins like Ossy and Mighty among others and the arrest of Chuwkwudumeje Onwuamadike, a.k.a Evans, the Epe incident was more of a litmus test for the Police.

SaturdayVanguard gathered that prior to the release of the students yesterday at Aboto Creek, Ilaje Local Government Area of Ondo State, at about 3.30pm, the Police and other security agencies engaged in painstaking investigation and actions that lasted more than two months.

It was during this period that the alleged mastermind of the incident, who was simply identified as America was killed in a gun battle with the Police.

A lieutenant of a kidnap kingpin

SaturdayVanguard learnt was a lieutenant of a kidnap kingpin, Ossy, who was killed by the Police in May this year at a hideout in Ajakpa, Ese-Odo Local Government Area of Ondo State.

Ossy and his gang, who were said to have killed an Army captain during one of their operations, had terrorized parts of Lagos, Ogun, and Ondo states before he was killed. After the death of Ossy, America assumed leadership of the gang and continued with criminal activities, especially in Lagos and Ogun states.

SaturdayVanguard gathered that upon assuming the mantle of leadership, one of America’s primary objectives was to avenge the death of his boss.

He was also concerned about the detention of his men, who were held by the Police for suspected high-profile crimes.

However, the abduction of the six Model College students was an opportunity for him to achieve these aims, as he was said to have demanded the release of his men while negotiating the students’ freedom.

While this demand was not met, he decided to steal a Police Gunboat at Police Marine, Aja in order to use it for an operation.

SaturdayVanguard was told, got wind of the plot and swung into action leading to the killing of America and his gang members while they were coming to attack them. Having killed the leader of the gang while the students were still not released, the Police decided to arrest the family members of America, who was said to have hailed from Ondo State.

Upon the death of America, another lieutenant known as Promise became the leader of the gang.

Like his boss, Promise was more interested in having his arrested gang members released than allowing the abductees to regain their freedom.

However, the Police continued their efforts by arresting his family members, thereby putting pressure on him to release the abductees. Just like the Lagos State government that had been concerned about the matter, Saturday Vangaurd learnt that Ondo State government also played some roles that resulted in the release of the students.

They were said to have contacted the state government which was said to have taken over the negotiation until the students were released yesterday.