According to what a student from the school shared with us on Wapbaze.com, it was said that the female student sold a fellow student to Ritualist for N100,000. The girl on the left is the seller and on the right is the sold. 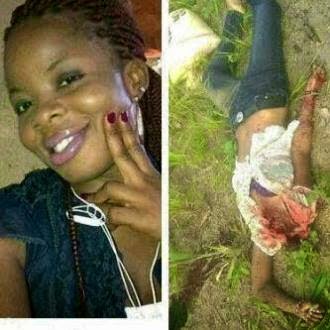 What we gathered; The two girls boarded a bike to a nearby Akoko land and negotiated N1000 as the transport fare with the bike man. When they got to the destination, the two girls went inside. After a while one of the girls came out without the other.

She paid the bike man N4000, that is an extra #3000 aside the negotiated fee. Surprised, the bike man curiously ask for the other girl. And she was like they should keep going that her friend will find her way back when she is done inside. Obviously the bike man wasn¡¯t convinced.

The smart bike man who sensed something bad, rode the bike straight to a nearby police station with the girl on it and reported the situation. By the time the police will get to the location where the ritualist were. They met the body of the other girl with her head missing.

As earlier stated, the student gave FB group link as the source hence we are not totally admitting to the fact that the news could be real.

However, whether or not the news is real isn't the main point but the fact that these things do happen in the real world and wapbaze should be wary of the kinda people we call friends or roll with. A word they say, is enough for the wise!