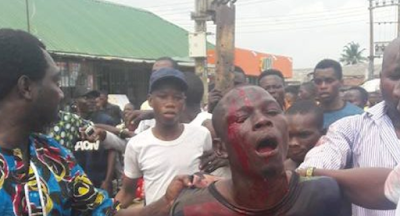 An 18-year-old man suspected to be a member of the reprehensible Badoo cult has been caught as he stole into a nursery school in Mushin, Lagos State.

The suspect, Fred Minima, who reportedly had the logo of the cult on his left hand, allegedly entered the premises of the nursery and primary school with the intention to kidnap some pupils.

He was said to have stolen some phones before he proceeded to attract the pupils. However, eagle-eyed security guard caught him and handed him over to the police.

He was charged before an Ebute Meta Magistrates’ Court, Lagos, on Monday, for allegedly belonging to a forbidden cult group, Badoo.

Minima, who resides at Akala area of Mushin, is facing three counts of attempted kidnap, belonging to an unlawful society and stealing. He pleaded ‘not guilty’ to all the charges.

But Police Prosecutor, Maria Dauda, insisted that the accused committed the offences on July 26 at 11.10 a.m. at No. 25, Akinola St., Mushin.

The News Agency of Nigeria reports that Section 287 stipulates three-year jail term for offenders, while kidnapping offences in Lagos State attract a penalty of life imprisonment or capital punishment.

The Magistrate, Mrs. O.O.A. Fowowe-Erusiafe, in her ruling, granted the accused bail in the sum of N50,000, with two sureties in like sum and adjourned the case until August 29 for mention.