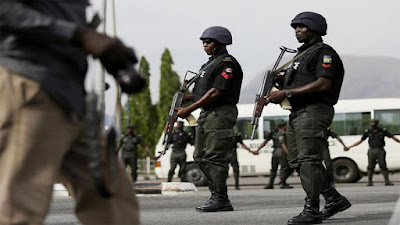 Two suspected armed robbers have been shot dead in Akokwa, in the Ideato North Local Government Area of Imo State, during a gun duel with operatives of the Special Anti-Robbery Squad of the state police command.

A police source, who confided in Punch Metro when the two corpses were brought to the police command in Owerri, said the exchange of gunfire between policemen and the suspects took place at about 9.30pm on Monday at a drinking joint in Akokwa.

According to him, the six-man gang arrived in a bus with number plate, Anambra FGG 62 YM.

He explained that on arrival, the robbers shot indiscriminately into the air before ordering all customers, the joint owner and his children to lie down.

“On receiving information that the gang was operating, SARS operatives mobilised to the scene. On sighting our men, they opened fire on them, but we were able to gun down two, while four escaped with bullet injuries,” he added.

The shop owner, Elochukwu Irechukwu, said the gunmen robbed him and his customers of money, phones, generator and other valuables.

The state Commissioner of Police, Chris Ezike, said his men were determined to flush out criminals from the state.