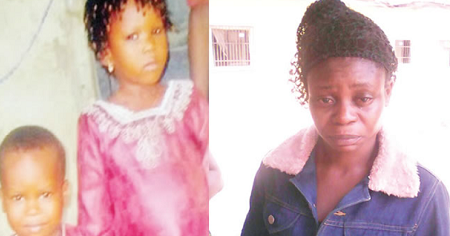 This will make any mother CRY. Just sad! The family of four-year-old Farouk and six-year-old Kafayat, are still in distress over the fate of the two children, who were abducted on November 28, 2016, by their mother’s apprentice, Gladys Austin.

Their father, Fatai Azeez, said the family was at a loss because even after the arrest of Austin by operatives of the Special Anti-Robbery Squad, Lagos, the suspect vehemently denied taking the children away.

He alleged that a police officer in charge of the case at SARS told the family to forget about the children as Austin had been released.

The mother of the children, Suliat, was said to have attempted suicide twice while in Lagos and was recently moved back to her hometown in Oyo State, where she allegedly attempted suicide again by taking Sniper.

Punch Metro had been reporting the escapades of Austin since she allegedly abducted the two children last year.

Punch correspondent, who spoke with the victims’ mother, Suliat, had reported that Austin resumed as an apprentice at her hairdressing workshop in the Okokomaiko area of Lagos on a Thursday and disappeared with the children same day while their mother was away.

She presented herself to the family as Grace John.

She, however, met her Waterloo after abducting a girl, identified as Oluwasemilore, daughter of a bead artist with whom she was working as an apprentice.

The three-year-old had passed through three different buyers and had been adopted as the last buyer’s daughter when Austin was arrested in Badagry.

The incident took SARS operatives to Abia and Anambra states before she was safely rescued in March 2017, after reported gun battles.

Austin was taken to the SARS office in Lagos, where Fatai and his wife, Suliat, identified her.

Punch correspondent, who witnessed the parade, reported that she was mixed with six other ladies and was picked out each time by residents and neighbours of the family.

However, Austin denied taking any other child aside Oluwasemilore.

The alleged nonchalance of the police reportedly drove Suliat into depression as she allegedly tried to end her life.

Fatai said, “Since that time, she could not bring herself to understand how she could lose two children in a day. The first attempt was when she was just throwing herself on the floor and smashed a stool on her own head. She picked a knife and was about to stab herself when people restrained her.

“Shortly afterwards, she wrote a suicide note with a knife by her side. People were, however, able to take the knife from her.  When I could no longer bear it, I asked that she be sent to her village in Oyo State for proper care. When there was no one around, she drank Sniper. She has not regained her health since that time.”

He lamented that a SARS operative, Ifeanyi, refused to give information to the family on the whereabouts of Austin, adding that the officer said SARS could not help his family because Austin was not arrested because of them.

“I called and begged him to use all means to get the girl to confess where she kept my children, but he said the girl denied abducting the kids.

“Later, when I called to know what was going on, he said he had already taken the matter to court. When I asked for the name of the court, he said he never told me he took her to court. He appears to have been compromised.”

Punch Metro learnt that the family obtained the services of a lawyer, one Sanni Saidi, who wrote a petition to the Commissioner of Police, Lagos State, Fatai Owoseni.

The petition, which was acknowledged by the CP’s office, called for the urgent intervention of Owoseni

The children’s father, Fatai, alleged that the police did not act on the petition and his family was forced to approach the Zone 2 Police Command, Onikan, with another petition, which was assigned to an officer in Section D7.

“When we got there, the officer demanded money for certain things, which we gave him. I was going there every day without any result. At a point, the policeman told me he couldn’t find the case file again,” he added.

Punch correspondent learnt that the family had also approached the Lagos State Office of the Public Defender for help as the hope of getting the two children appeared to be diminishing every day.