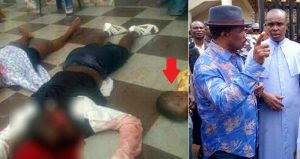 Governor Willie Obiano of Anambra has vowed not to rest until the perpetrators of Sunday’s killings at St. Philip’s Catholic Church, Ozubulu, near Nnewi, which claimed at least eight lives and injured 18 persons are brought to justice.

Mr. Obiano made the vow when he visited the scene of the killings in company of the Commissioner of Police in the state, Garba Umar.

The governor expressed grief over the death of the worshippers, describing the attack as “barbaric, sacrilegious and totally unacceptable,” while also debunking speculations of possible invasion.

According to him, intelligence report linked the shooting to an existing feud existing between some members of Umuezekwe Ofufe Amakwa community of Ozubulu living abroad.

“It is an isolated case and I urge worshippers in the Church and residents of the area to go about their normal activities.”

Mr. Obiano assured the community that his administration was on top of the situation and later visited the injured persons receiving treatment at the Nnamdi Azikiwe University Teaching Hospital, NAUTH, Nnewi.

He promised that the state government would pay the hospital bills of the victims.

He also said that 50 doctors had been mobilised to the hospital to assist in providing the best medical care to the injured persons.