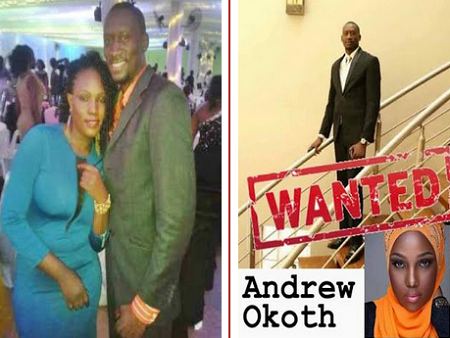 The Ugandan man, Andrew Kelvin Okoth who murdered his girlfriend and fled has been arrested and has confessed to the crime. If you missed the earlier story, see it here.

“He was in the bathroom and heard her speaking on phone to an unidentified person,” Kasingye said.

Natoolo never took her charged boyfriend serious which angered him when he confronted her.

“He threw a flat iron at her and she started pleading for her life.”

“Despite her pleas, Okoth stabbed her repeatedly with a knife until she died,” Kasingye revealed.

According to eyewitnesses, after murdering her, Okoth locked the body in a house in Mbalwa, Namugongo before rushing to a nearby clinic to nurse injuries sustained in the fight.

Natoolo’s body was recovered at the start of last week by police after being tipped off by neighbors and they launched a man hunt for Okoth.

Police later arrested Okoth from a house in Kiwatule where he had been hiding.

Kasingye at the press address urged lovers to be tolerant to each other and also solve issues amicably.

“If possible, people should get counsellors to guide them in case of misunderstandings, “Kasingye advised.

“For me, beating or stabbing your lover doesn’t in any way prove that you are strong. Stop it.”