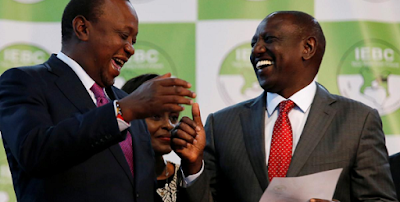 Kenya's President Uhuru Kenyatta secured a second term in office, results showed today, setting off wild street celebrations by his supporters and protests in opposition strongholds in the capital and the west of the country.

Speaking after the result of Tuesday's election was announced, Kenyatta offered an olive branch to the opposition, urging national unity and peace with rivals who have rejected the result and raised the prospect of street protests.

Many Kenyans fear a repeat of the violence that followed the 2007 disputed election, when about 1,200 people were killed and hundreds of thousands displaced as protests over the result led to ethnic killings.

Kenyatta got 54.3 percent of the vote, ahead of rival Raila Odinga who secured 44.7 percent, according to election commission figures. Nearly 80 percent of the 19 million registered voters cast their ballots.