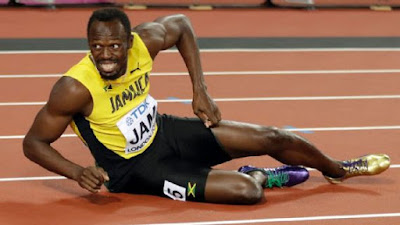 Usain Bolt was ramping into warp speed when suddenly, stunningly, the sprint turned into a somersault.

Fifteen steps into the final homestretch of his final race, something gave in Bolt's left hamstring. The World's Fastest Man skittered to a stop, hopping, skipping, jumping and finally dropping to the ground and tumbling forward before coming to a rest.

While the winning team from Britain crossed the finish line, Bolt was writhing on the track, where he wound up chest down with his face pressed into Lane 5. He was certainly every bit as stunned as any of the 60,000-plus who packed the stadium Saturday or the millions watching one of the world's most entertaining showmen make his final curtain call in the 4x100-meter relay at world championships.

There was no celebration -- no gold, no silver, not even a consolation bronze, which Bolt received a week earlier in his final 100-meter race.

Jamaica closed the night with "DNF" by its name: Did Not Finish. Bolt was helped into a wheelchair but eventually got to his feet and, assisted by his teammates, limped gingerly across the finish line. He gave a few waves to the crowd, then left for the trainer's room and, with that, presumably left track and field forever. 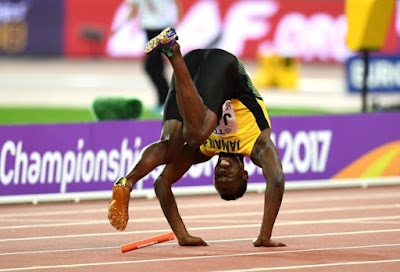 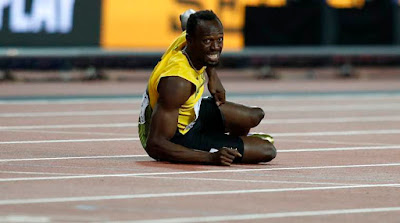