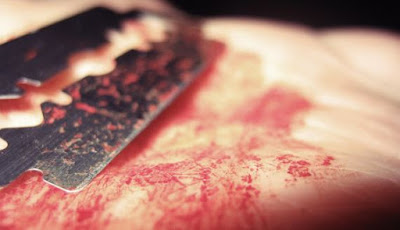 The residents of Obanla area in Akure, Ondo State were astonished when a middle-aged man identified as Oluwole Aiyeloja cut off his penis with a razor blade publicly on Thursday.

According to an eyewitness, who did not want his name in print, Aiyeloja, after cutting off his penis, was trying to cut the scrotum to pull out the testicles, but a Good Samaritan ran to him, took the razor and rushed him to a police station.

The source said, “We were at Obanla Junction (Akure) when we saw a well-dressed man sitting on a bench. Suddenly, he just started pulling off his clothes right there. Later, he started cutting his penis to the shock of everyone.

“It was very gory; blood started gushing out of his private part. One man had to run to him (Aiyeloja) and collected the razor from him before other people went to the ‘A’ Division Police Station to invite the police. He was later rushed to the hospital.”

According to the eyewitness, the appearance of Aiyeloja did not show any visible sign that he was mentally challenged.

The Public Relations Officer of the Ondo State Police Command, Femi Joseph, who confirmed the incident, said the command had commenced investigation into the matter and that preliminary investigation showed that Aiyeloja might be suffering from “a spiritual or psychological problem.”

“He really needs help, which we are trying to give him. At present, he is responding to treatment at the police hospital.”

Joseph, however, said the victim would not be charged for any offence, despite causing harm to himself as the concern of the police “for now is how to get him necessary help.”