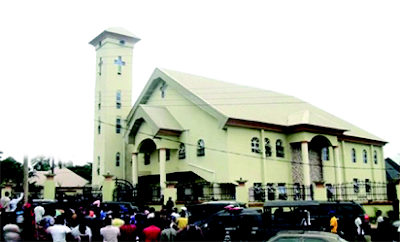 Ozubulu youths under the aegis of Ozubulu Youths Association, OYA, yesterday, protested the reopening of St Philip’s Catholic Church, Amakwa Ozubulu, Anambra State barely a week after gunmen attacked worshippers, alleging  what it called attack on their people without provocation and police inability to bring the perpetrators to book.

This is even as a human rights group, International Society for Civil Liberties and the Rule of Law, Intersociety, yesterday, said it has investigated last Sunday’s killing of a policeman and a motorcyclist at Oguta Road in Onitsha, near the Assemblies of God Church and discovered that the attack was not targeted at the church worshippers.

The youths, who marched from Ozubulu motor park opposite Ekwusigo Local Government headquarters in Ozubulu, to Ozubulu Police station, and to the palace of the traditional ruler of the community, Obi Fidelis Nnamdi Oruche said they have had enough of  attacks on innocent people of the community.

Addressing newsmen shortly after the peaceful protest, President of OYA, Mr Emeka Anakwe, a Port Harcourt-based Clearing and Forwarding Agent, said it was worrisome that a church, where over 13 people were killed by gun-men, would be reopened for service one week after the attack, when investigation into the matter has not been concluded, contrary to the earlier promise by the Nnewi Diocese.    .

Anakwe who condemned the attack on the innocent worshippers, said  “the youths of Ozubulu are concerned about the attack because the entire people of Ozubulu are now living in fear. We cannot sleep comfortably any more because of fear of recurrence.

“We have in the past, seen a situation where a security man was caught with fresh human head and was arrested but when we did not see him being prosecuted, we started asking questions, but we were told that the matter is in the court.

“We are not happy that when incidents like this happen, it is swept under the carpet. We are peaceful people, we are not into crime.

In the past, people from Nnewi, Nnobi, Oraifite and other neighbouring towns came here to drink and relax because of the peaceful atmosphere.

Our town has always played host to people from other communities in the state because of its peaceful nature, but today that situation is being eroded with these nasty stories of killings  here.

We must take our destiny in our hands.

Intersociety insisted yesterday that the shooting leading to the death of a policeman and an Okada rider along the Oguta Road and its adjoining Tasia Road in Onitsha, on Sunday had nothing to do with the Assemblies of God Church, as was the case with St. Philip’s Catholic Church.

In a statement issued by its leader, Comrade Emeka Umeagbalasi, Intersociety noted that  the Sunday killings were carried out by a three-man armed gang operating on a high speed motorcycle.

The statement added that the armed gang had accosted and opened fire on an armed policeman stationed in front of the gate of the Assemblies of God Church, located on Oguta Road, killing him instantly after snatching his rifle.