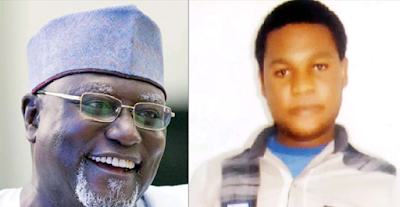 Some operatives of the Department of State Services have been accused of abducting an Abia State pastor, Chisom Anaele, and carting away phones and money belonging to his brothers.

Punch Metro learnt that the officials had forced their way into the victim’s family house on Nzeocha Street, Aba, and ordered his brothers to lie on the ground.

They were alleged to have taken their phones and money before whisking the 24-year-old founder of The Lord’s Warrior Charismatic Ministry away in a Jeep.

Punch correspondent gathered that the gunmen, who came in four vehicles, rebuffed attempts by Chisom’s brothers to know his offence or where the operatives were taking him to.

A witness and elder brother of the victim, Nnabueze, said he had yet to recover from the shock of the attack.

He said, “We were all sleeping around 2am on April 3 when the DSS officials broke into the house. They took away our phones before seizing him. When I asked them where they were taking him to, they slapped me. They beat him and did not allow him to change his clothes before throwing him into the Jeep they brought.”

Another member of the family, Osinachi, said the men threatened to shoot him dead when he enquired the reason for the arrest.

He noted that the operatives went away with seven phones and some money he had in his wallet.

The eldest member of the family, Vincent, who was away when the incident happened, said the family was sure the men were security operaratives because they wore DSS bulletproof vests and had the agency’s name inscribed on their guns.

He said the following day, members of the family searched the Port Harcourt, Rivers State; Aba, Abia State; Owerri, Imo State, and Zone 9 offices of the DSS without any result, adding that all the directors denied knowledge of the arrest.

“However, one of the phones they took away was switched on. When we called the line, it rang, but nobody picked it. I reported my discovery to the Officer-in-Charge, Special Anti-Robbery Squad, Imo State Police Command.

“The command tracked the line to the Port Harcourt office of the DSS. The man advised me to go there because he was sure my brother was in their custody.

“When I went back there, I met a DSS officer and explained to him how we tracked one of the phones they took along during the arrest of my brother to their office. I also showed him my brother’s picture. That was when he agreed that my brother was there,” he added.

Vincent said the officer assured him that his brother would be released at the end of investigations, adding that all his enquiries about Chisom’s offence were rebuffed.

He said the family lawyer, one Austin Nwosu, made several attempts to see the victim, but was prevented by the DSS.

Punch Metro learnt that the OC legal of the DSS in Port Harcourt later met Vincent and the lawyer, promising to arraign the victim in court where the family could take his bail.

“When I demanded to know my brother’s offence, he said nothing. He personally confirmed that my brother was with them. He requested that we gave him some money, which we did.

“The day he said my brother would be in court, they brought two different suspects. My brother was not one of them.  When our lawyer asked him, he said it was a mistake and pleaded for time. Till now, he has not done anything about it,” he said.

Punch correspondent gathered that one Emmanuel Francis, who was in the same cell with Chisom before the former’s release, contacted Vincent.

Francis reportedly claimed that the 24-year-old had been moved from the Port Harcourt detention facility of the DSS to Abuja.

“It has been confirmed that he is in Abuja. However, they have refused to release him or take him to court. A member of the House of Representative, Henry Nwawuba, who is from our constituency, wrote a letter to them, but they refused to reply.

They refused to say what my brother said wrong on the social media. I am confused. My family is poor and my siblings are not doing anything serious for a living. The little savings I had out of my job as a salesman in Owerri, has been spent on this case and yet, there is no positive result,” he added.

The DSS, which does not have a spokesperson, could not be reached for comment, like in many other cases of alleged human rights abuses.