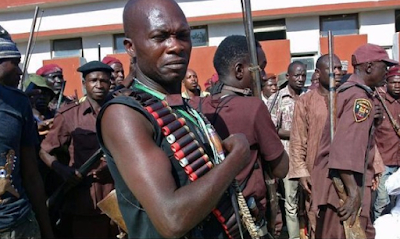 There was wild jubilation in Madagali Local Government Area of Adamawa State when news of two Boko Haram Commanders killed by hunters was announced.

The state’s Commissioner for Information and Strategy, Mr. Ahmed Sajoh, told newsmen that the feat recorded by the hunters received wide accolade, saying government will surely reciprocate the gesture through provision of logistic support.

The hunters repelled an attack by Boko Haram on Bakin Dutse and Gadamayo villages in Madagali council, killing two top commanders in the process.

Spokesman of the hunters in Madagali, Ali Hammajabu, said: “Yesterday (Wednesday), at bout 11p.m., our hunters successfully averted a massive raid on villages of Bitu, Gadamayo and Bakin Dutsi.

“The terrorists, who were on their way to attack selected communities, were ambushed on receiving intelligence report of the terrorists’ intention. We engaged them and in the process, two Boko Haram members, in military camouflage were killed.

“We found two AK-47 rifles and Police teargas cannisters, which we handed over to soldiers in Madagali.”