I Was Arrested At Cigarette Point- Cult Leader 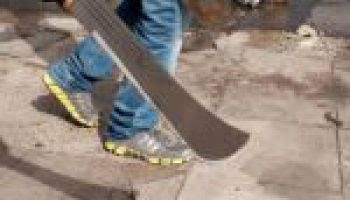 A self-confessed cultist, Aroba Jamiu, was arrested by the Police when he stepped out to buy a cigarette after initiating new members. He told newsmen that he was forcefully initiated into cultism.

Jamiu, who was arrested alongside other suspected cultists by the Police yesterday, during an initiation in Obalende area of the state, was said to be a member of the Eiye confraternity.

During preliminary investigation, Jamiu, who confessed to be the group’s second in-command, was discovered to have been on the Police wanted list, over an alleged murder of a member of a rival cult, five years ago.

Weapons such as axes, knives and cutlasses were reportedly found on the arrested suspects. In an interview with Vanguard, the suspect who was clad in his confraternity’s full regalia, disclosed that he was arrested when he came out of the initiation venue to buy a stick of cigarette.

He said: “I am the second-in-command, but I am not a robber. We just finished initiating new members into our group in a hotel around Obalende and I came out to look for cigarette, when I saw people running.

“I stood where I was because I did not know what was after them. Before I knew it, some policemen came and arrested me.

“I was initiated into the group without my knowledge 10 years ago. On that day, a friend invited me for a drink. But on getting to the supposed joint, some boys held me, blindfolded me and started beating me.

“Later they removed the blindfold and informed me that I had been initiated into Eiye confraternity. Before then, I used to think that cult members were students of higher institutions, I never expected to be one because I am just a welder.

“We do not drink human blood during initiation. We only become vicious when anyone steps on our toes.”

Speaking while parading the suspects, Commissioner of Police, Lagos State Police Command, Fatai Owoseni, said the arrest was made during raid at a crime-prone area in Obalende area, where criminals used as haven.

He said: “Some cult groups identify certain days as revenge day. Such as August 8 (8/8). More suspects of the 8/8 phenomenon have been arrested and these are some of them. They would be charged to court accordingly.”