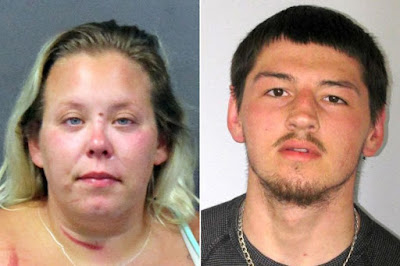 A couple lured a teenage babysitter to a motel room where she was allegedly imprisoned, drugged and forced into having sex with at least five men a day.

Christopher White, 19, and his girlfriend, Adria Regn, 28, are accused by police in New Jersey of beating and trafficking the 17-year-old victim for almost a fortnight before she managed to escape.

The couple allegedly drugged her by making her inhale crystal methamphetamine and forced her to have sex with multiple men while she was kept captive.

It is believed the teenager was tricked into entering the motel room thinking she was arriving for a babysitting job.

Court documents allege the couple prostituted the teen at motels after posing naked pictures of her online and advertised her as an escort.