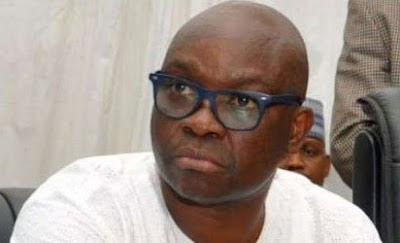 Ekiti State Governor, Mr Ayodele Fayose, has cautioned the Federal Government over its categorisation of hate speeches as an act of terrorism.

The governor accused the All Progressives Congress of being number one promoter and beneficiary of hate speeches in the country.

“When the APC was looking for power, several provocative statements were made. Nigerians are yet to forget President Muhammadu Buhari’s ‘the dog and the baboon would all be soaked in blood’ hate speeches and the threat by the APC to form a parallel government.”

The governor said this in a statement issued in Ado Ekiti on Friday by his Special Assistant on Public Communications and New Media, Lere Olayinka.

Fayose, who said he was totally against hate speech and would support any effort to curb it, added that it was important to caution the federal government on the danger inherent in the blanket categorisation of hate speech as treasonable.

“What can be more treasonable than these statements made by President Buhari and his party?

“It is also on record that during the 2011 election campaign, President Buhari’s inciting statement led to widespread violence by his supporters in the North after he lost. Over 1000 people were slaughtered in cold blood, including innocent National Youth Service Corp members.

The governor counselled that rather than a blanket criminalising of hate speech, the federal government should embark on a reorientation of Nigerians, especially the youths on the consequences of hate speech to the unity of the country and restore the confidence of the people in the government.