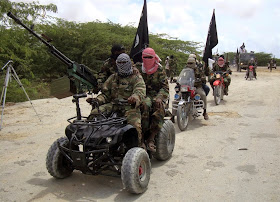 This madness is sure getting out of control. Boko Haram terrorists, at the weekend, raged in Borno State where 16 persons were feared killed in a fresh attack.

In two separate attacks, five policemen were reportedly abducted with their Armoured Personnel Carrier while a Chinese was killed and 10 others kidnapped during an overnight attack in Kuseri Village between Gamboru Ngala council of Borno State and the Cameroun border.

five policemen attached to Banki, a border town with Bama and Cameroon Republic, were attacked by Boko Haram. The terrorists opened fire on the APC No: NPF4960c conveying the policemen led by an inspector and five others.

The policemen quickly dropped from the APC and ran into the bush before the terrorists went away with the abandoned APC .

As I am talking to you now (yesterday), the whereabouts of the policemen are yet to be known and we suspect the terrorists might have kidnapped or killed them.

A source said the tension in the are is high. The attacks put President Goodluck Jonathan and his counterparts from Nigeria's neighbouring countries meeting in Paris, France, on Saturday under pressure to come up with concrete steps to address terrorism in the sub region.

The missing/abducted policemen were identified by sources as Inspector Luka Maina, Sergeant Manya Chaka, Corporals Hassan Dauda, Emmanuel Onoche and Umar Ali. According to Vanguard, the Banki incident took place by 9:50am on Friday when some policemen attached to the Banki Division were attacked by terrorists while trying to drop six of them at the junction road who were to proceed to their promotion course examination and interview.

The Borno Commissioner of Police, Mr. Tanko Lawan,confirmed the abduction of the five policemen and the seizing of the Armourd Personnel Carrier (APC).

"The Boko Haram militants were heavily armed, they came in five vehicles", an official in Waza, a town near the site of the attack, said on condition of anonymity.