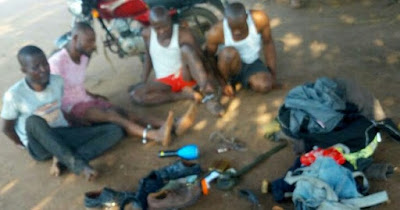 The police in Ogun State Police have arrested four suspected cow thieves, who allegedly also specialise in hijacking cement trucks. The police spokesperson in the state, Abimbola Oyeyemi, disclosed this in a statement sent to Premium Times today.

“Men of Ogun State police command on Saturday 19th of August at about 1 a.m. arrested four cattle rustlers at Ofada area of Obafemi-Owode Local Government Area of the state,” he said.

Mr. Oyeyemi said the suspects earlier in the week robbed two herdsmen, identified as Muhammed Ruga and Babuga, of two cows and were planning another operation at Orile Igbehin area of Ofada when they ran out of luck.

He said they had attacked the two herdsmen with cutlasses, tied them up and made away with their cows.

Mr. Oyeyemi said the Divisional Police Officer for Owode Egba, Shehu Alao, led his officers to effect the arrest of the suspects after a report was lodged.

“The suspects have been identified by their victims. They also confessed to be the brains behind the hijacking of many cement loaded trucks in the state and that one Femi who has houses in Shagamu and Itori is the receiver (of the stolen goods),” he stated.

The police spokesperson said efforts were ongoing to apprehend the alleged receiver, adding that exhibits recovered from the suspects include three cutlasses, rope, iron rod, charms, jack-knife, handsets, an unregistered motorcycle and green belts of a security agency.

He said the state commissioner of police, Ahmed Iliyasu, had directed that the suspects be transferred to the Federal Special Anti-Robbery Squad, FSARS, for further investigation ahead of their prosecution.