Jay-Z Finally Talks About That Infamous Elevator Fight With Solange 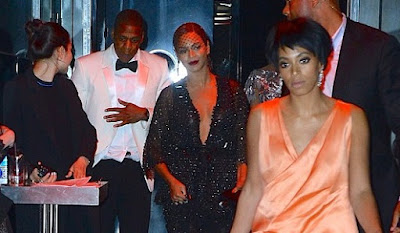 Jay-Z insists he's only ever had one argument with Solange Knowles. The 47-year-old rapper was famously caught on camera rowing with his sister-in-law in an elevator after the Met Gala in 2014 and but the 99 Problems hit-maker - who has daughter Blue Ivy, five, and twins Rumi and Sir, two months, with wife Beyoncé - insists the incident was not typical of their relationship.

He said: 'We've always had a great relationship. I fought my brothers and argued with my brothers my whole life. It just so happens, who we are, these things go into a different space, but it ain't nothing.

'We've had one disagreement ever,' he claimed in the new interview, recorded before his headlining gig at the V Festival in Chelmsford, England on Sunday.

And Jay insists things are still 'cool' between himself and the 31-year-old singer and he regards her as his 'sister.' Speaking on the Rap Radar podcast, he added: 'Before and after, we've been cool. She's like my sister. I will protect her. That's my sister. Not my sister-in-law. My sister.'