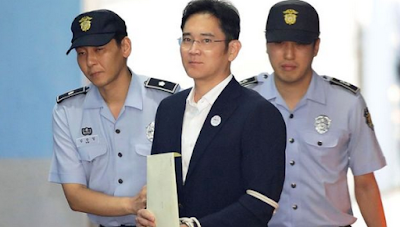 A court in South Korea has sentenced Samsung's billionaire heir-apparent Lee Jae-yong to five years in prison for corruption.

Lee was convicted of bribery in a scandal that also saw the impeachment of South Korea's former president.

The case has gripped the public amid growing anger against South Korea's biggest companies, known as chaebols.

Lee, who denied all charges, had faced a jail sentence of up to 12 years.

Also known as Jay Y Lee, the de facto head of the world's largest smartphone maker had been detained since February on a string of corruption charges.

The 49-year-old is accused of giving donations worth 41bn won ($36m; £29m) to non-profit foundations operated by Choi Soon-sil, a friend of South Korea's former President Park Geun-hye, in return for political favours.

Prosecutors said the donations were made to Ms Park's confidante to win government support for a big restructuring of Samsung that would strengthen Lee's control over Samsung Electronics.

But Lee's defence team said that the payments were signed off without his knowledge. Long story cut short, he has now being jailed for 5 years.