Cricket Star Keeps His Fitness Tracker On During S*x To Motivate Him To Try Harder, But Wife HATES That 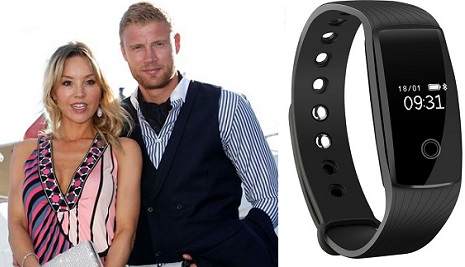 Andrew 'Freddie' Flintoff has revealed he keeps his fitness tracker on during sex - to motivate him to "try a bit harder".

The former England cricket star says he keeps his FitBit on even during intimate moments with wife Rachael, who isn't too impressed.

Flintoff, 39, says he's currently trying to burn 4,000 calories a day so has to monitor every type of exercise - even romps in the bedroom.

But Rachael, 37, said she finds the FitBit offputting.

In new Channel 4 show Married To A Celebrity: The Survival Guide, she says: "This is the weirdest and most wrong out of everything you do.

"Robbie Savage bought him a Fitbit for Christmas but there’s certain intimate moments in the bedroom, you should take your Fitbit off."

"Things are happening and then your husband’s wrist is flashing telling him his heartbeat and how hard he’s working. It’s really wrong.

"It’s putting me off though. It’s like you’re seeing it as another training session rather than anything else.

Freddie replies: "I just want to get my steps in! When I get excited my legs start going, the steps go on.

The pair have been married for 12 years and have three children Holly, Corey and Rocky.