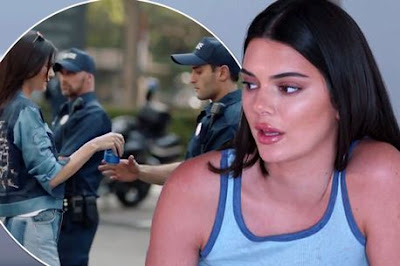 Kendall Jenner has addressed the Pepsi advert controversy for the first time since it caused a major uproar back in May.

Pepsi eventually had to pull the ad while admitting that it "missed the mark" with the protest themed advert, which saw the model, 21, appearing to calm a protest by handing a police officer a can of the famous cola.

Five months later, in scenes filmed for Keeping Up With The Kardashians, the reality beauty - who was said to be "mortified" at the time - is seen speaking about the embarrassing campaign.

In the trailer for the upcoming series of the E! show, she is sat on a bed with sister Kim. “It feels like my life is over,” she tells her older sibling.

Kim replies, "You made a mistake." While Kendall had kept silent on it, mum-of-two Kim opened up about the ad last month in an interview with The Hollywood Reporter.

"We're not perfect, but you see these things in the media, like Kendall and her Pepsi ad, where I see her at home crying.

"But in the media she looks another way because she's not addressing it."

While Kendall added: "I'm the most private one. If there's a moment I don't want anyone to hear, I talk to myself or talk to someone in another room."

Kim then revealed that she encouraged Kendall to address it publicly.

"I'm just like, 'This is wrong. You need to speak up'. [Kendall] was like, 'I don't ever want to show that footage of me crying.'"

"She was trying to not make excuses or be dramatic, but that was what she was going through at the time."

After the ad was pulled less than 24 hours after it was released, a spokesperson for the drinks giant said: "Pepsi was trying to project a global a message of unity, peace and understanding.

"Clearly, we missed the mark, and we apologise. We did not intend to make light of any serious issue.

"We are pulling the content and halting any further rollout. We also apologise for putting Kendall Jenner in this position."