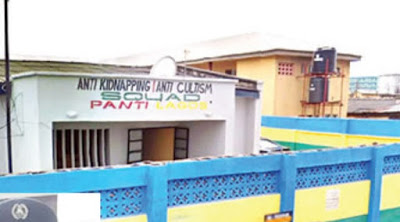 Policemen attached to the Anti-Kidnapping and Anti-Cultism Squad of the State Criminal Investigation and Intelligence Department, Lagos State Police Command, have been accused of collecting N50,000 before granting bail to one Blessing Taiwo, who was arrested for alleged theft.

Although the suspect was released on Saturday after the money was paid, the police allegedly seized her mobile phone pending when a balance of N20,000 would be paid on Tuesday.

Punch Metro learnt that the suspect’s sister, Florence Taiwo, who always took food to her in the cell, was allegedly molested by the policemen who touched breasts and dipped hands into her private parts before allowing her to take the food into the cell.

Punch correspondent gathered that Blessing, a mother of two, had been arrested on Monday after her boss, Mrs. Abiola Osagie, accused her of stealing $50,000 while the latter was away on a trip.

After spending three days in the cell and the intervention of the Office of the Lagos State Police Public Relations Officer and an Assistant Commissioner of Police, the suspect was released on bail.

However, a demand of N2m was allegedly made, which was negotiated to N70,000.

“After we paid them N50,000, the police didn’t release her (Blessing) phone. They said we should bring the remaining on Tuesday when her phone would be released,” a family member told Punch correspondent.

On how the matter started, Blessing said she had been working as the office administrator and assistant to Osagie for the past eight years in an international investment and equity firm, AfricInvest.

Blessing said, “The office cleaner was sacked more than a year ago and since then, a new cleaner had not been employed. I have been the one cleaning the office; washing the toilet and doing other menial duties.

“During the quarterly appraisal, I raised issues about the general cleaning of the office and suggested we get somebody to do it. After she travelled, I asked her driver to do the job for a fee of N10,000. I decided to give the job to him to save cost.

“However, on the last day of the cleaning, I observed the man messed up the chemical for the cleaning of the floor and I got a man to assist with the clean up.

“She returned from her trip on Thursday, and by Friday, she came to the office. I gave her feedback about the cleaning. I told her I invited four people from outside to do the job. I didn’t tell her that her driver did the job because if she knew, she would have asked why I paid him any money.”

Blessing said she, however, received a call by 8.30pm on Monday, as Osagie asked her to get to work early on Tuesday over an issue.

“When I got there, she said I should get a ladder and climb to a particular cabinet. I thought she wanted me to bring down some files.

“However, I found a black bag and she asked me to bring it down. She said she left $50,000 in the bag, among other currencies, and I told her that nobody took anything from the place because I was careful,” she added.

Policemen from the Ikoyi division were said to have been invited to the firm, who interrogated the suspect.

Blessing, 43, said she informed the police that the driver and another man were involved in the cleaning and she supervised them.

The driver, however, reportedly told the police that the bag in question had been taken home by Osagie on Monday.

He allegedly said he noticed that the bag was heavy, adding that he did not know the content.

A security man on the premises, who was also interviewed, allegedly told operatives that Osagie was seen returning to the office alone late on the same night with the bag.

Punch Metro learnt that operatives searched the home of Blessing and checked her bank account balance without finding any money.

The Divisional Police Officer allegedly said there was no evidence linking Blessing with the incident, but the complainant allegedly insisted that she was culpable.

The matter was subsequently transferred to the SCIID, Yaba, from where it was referred to the Anti-Kidnapping and Anti-Cultism Squad headed by CSP Akinade Adejobi.

The suspect’s sister, Folake, said, “The police at Ikoyi told her that they didn’t find any evidence of stealing. But she (Osagie) insisted that my sister took the money.

“The case was transferred to the SCIID, Yaba, on Wednesday, from where it was referred to Hogan Bassey Crescent. My sister was detained that night and we were asked to return the following day.

“During the interrogation, the driver, who agreed to cleaning the office and collecting N10,000 said he assisted the woman to carry the bag into the car the night preceding when she declared the money missing. She didn’t deny it.

“The other cleaner said he didn’t spend more than 20 minutes on the premises and he assisted in mixing the chemical. When it was my sister’s turn to talk, she (Osagie) asked her to keep quiet and she should only respond to questioning.”

She said after the intervention of the Lagos police PRO and the ACP, Adejobi agreed to give the suspect bail.

Another member of the family, Florence, said she had yet to recover from the harassment she suffered at the police formation while taking food to Blessing in the cell.

She also alleged that her sister was subjected to inhuman treatment.

She said, “The stench in that station was horrible and I later realised that it came from my sister’s cell, where a mentally deranged woman was being held for alleged ritual dealings.

“I personally went through hell. Any time I was going to give her food, they would collect a bribe of N1,000 to allow me in.

“When I get in, the policemen will start touching my body, including putting hands in my private parts.

“There is a particular one that has been harassing me with calls and asking me to date him. The policemen there are not normal; they wear earrings in their tongues, ears and nostrils.”

Punch Metro obtained a petition on the case by the Network on Police Reform in Nigeria, calling on the new Commissioner of Police in the state, Edgal Imohimi, to investigate the matter.

The group said not only did Adejobi detain Blessing for three days, which violated her rights, he also collected N50,000 for bail as against the police ethos of ‘bail is free.’

It said, “In the first place, a case of stealing ought not to be taken to or investigated by the Anti-Kidnapping Unit… And the OC decided to do the complainant’s illegal biddings, which the DPO at Ikoyi professionally refused to do.

“NOPRIN is shocked at the impunity with which the OC Anti-Kidnapping assumed the role of investigator, prosecutor and executioner. He has shown obvious interest and bias in this case. The conduct of the OC manifests notoriety for corruption and abuse of police power. He is also a bad influence on other officers under him.

“Police officers who sexually abuse female detainees or women who come in contact with them should not be allowed to remain in the police force. It is an egregious abuse that should be treated with great seriousness.”

The group called for investigations into the incident and alleged acts of misconduct and infractions of the law by the OC and some officers under him.

The complainant, Osagie, said she had nothing to gain from wrongly accusing Blessing.

“The fact is that there was money in that bag and today, there is no money. It is a mystery that has to be unravelled. I have gone through a stress in a week that I haven’t gone through in my life. What is my benefit in that? That I want to get the money that I didn’t have, or expect Blessing to raise such funds?

The Lagos State police spokesperson, Olarinde Famous-Cole, said the allegations had also been trending on the social media, saying the command would investigate them.

In a statement on Sunday, he said the Investigating Police Officer, Sergeant Kudeinbu Sheu, had been arrested and was being interrogated at the X-Squad.

He said, “The command wants to reassure members of the public that proper investigation will be carried out and the command will like to encourage the suspect, Blessing Taiwo, to come forward with relevant information to aid the police in the ongoing investigation.”