50 Die In Twin Attacks In Iraq 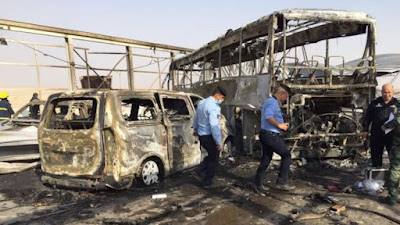 At least 50 people have been killed in two attacks in southern Iraq, health officials say.

In the first attack, a suicide bomber detonated his vest and gunmen opened fire inside a roadside restaurant near Nasiriya, the capital of Dhiqar province, security sources said.

Soon afterwards, a car bomb exploded at a nearby checkpoint. One report said four Iranians were among those killed.

The so-called Islamic State group has said it carried out the attacks.