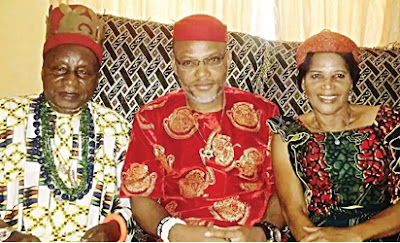 Governor Okezie Ikpeazu of Abia State, has said that he will not dethrone the traditional ruler of Afara Ukwu Ibeku Autonomous Community of the state, His Royal Highness, Eze Isreal Kanu, the father of the leader of Indigenous People of Biafra, IPOB, Mazi Nnamdi Kanu because of the involvement of his son in the ongoing tension in the state.

There have been calls from some people from Umuahia that the governor should dethrone Kanu’s father following the horrible experience the people had from the military that had invaded all streets in the area to curb the activities of IPOB.

Specifically, the Umuahia Youths Movement On Sunday gave governor Ikpeazu a 24-hour ultimatum to dethrone Kanu’s father as paramount ruler of else they would take the laws upon their hands claiming that the royal father was not fit to be king as he was unable to control his son.

But another group, Ibeku Youth Assembly warned against any attempt to remove the traditional ruler from his throne.

But Governor Ikpeazu who was at the Presidential Villa to brief President Muhammadu Buhari who was represented by the Vice President, Prof. Yemi Osinbajo on the security situations in his state told State House correspondents that there was a difference between Kanu and his father.

According to him, “I clearly separate Kanu from his father. The processes of handling traditional institutions are enshrined in the laws of our land.

“Traditional rulers who are members of our constituency have leadership, they will do the needful at the appropriate time. But for me, I think their is a clear division between Nnamdi Kanu and his father.”