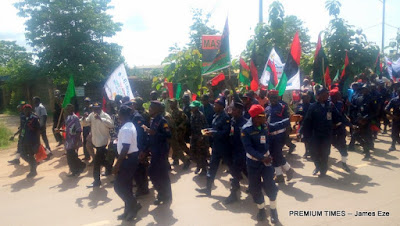 A Federal High Court in Abuja on Wednesday granted the Nigerian Government an interim injunction proscribing the activities of the Indigenous People of Biafra (IPOB).

The Minister of Justice, Abubakar Malami, had filed an exparte application urging the court to grant the injunction.

The News Agency of Nigeria (NAN) reports that President Muhammadu Buhari had earlier given written approval for the proscription of the group, pending legal process.

Governors of the Southeast states took the first step to ban the activities of the group after the military had declared it a militant terrorist group.

But the decisions drew widespread condemnation, with many accusing the government of not following due process.

The military later reversed itself, denying it had declared the group a terrorist organization.