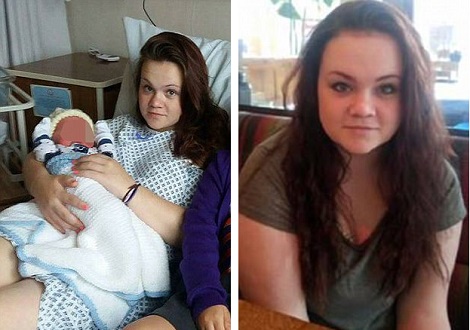 A teenage single mother hanged herself after her ex-boyfriend ignored a string of texts she sent to him threatening to kill herself.

Chloe Hiller, 17, sent her former sweetheart 37 messages some of which read: 'I can't do this anymore. I hang myself on Friday.' She also told him she planned to buy rope and asked him whether it was possible to buy rope from a garage.

But the boy, also 17, didn't take her warnings seriously and failed to raise the alarm. Chloe was later found hanged at a park near her home in Blackpool, Lancashire, having told staff at a mother and baby unit she felt 'sh***y'.

Police investigated Chloe's ex-boyfriend for possible charges of aiding and abetting her suicide but no action was taken against him. When questioned by detectives he refused to give up Chloe's pin code to her phone.

Officers later accessed the device anyway and found the messages plus photos depicting superficial self-harm marks on a girl's body. They could not be sure the pictures were of Chloe.

At an inquest in Blackpool, the dead girl's family shook their heads in disbelief as a coroner cleared the boy of wrongdoing and ordered he be granted anonymity because of his age. He was not at the hearing.

Chloe's mother, Louise Hiller told the inquest how her daughter was a 'shy girl and an amazing mum' but had been struggling in the months after the birth of her son.

She said: 'I noticed that she was keeping the curtains shut, sitting in the dark and not going out.

'She wasn't wearing make up and her hair was greasy. I believe her ex-boyfriend did used to beat her. She had bruises. She would tell me that it was a door handle or things like that but it really did affect her. I was so concerned about it that I reported it to the police.'

Recording a conclusion of suicide, Coroner Alan Wilson said: 'With regard to her ex boyfriend and him aiding or abetting in the suicide, while it is clear there were text messages between them it is not enough that it satisfies the necessary standard of proof.

'There may have been issues in terms of morality with regards to a lack of response to the text messages that he received but he could have had no way of assessing or believing or could have expected that Chloe would act in the way that she did. I cannot determine criminal liability.

The decision of this court is to consider evidence into the sad and tragic circumstances of Chloe's death of Chloe Hiller.

'It is clear that her relationship was having an impact on her and the issues contributed to her intention to end her life.'