Dear Gov Fayose, One Of Your Lawmakers Has Been Accused Of S*xual & Physical Assault By A Widow 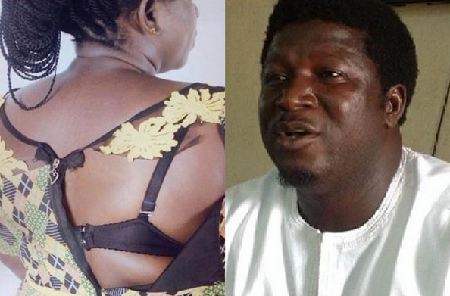 Dear Governor, we know you love your people and that is why we are tagging you on this. We see the way you play games with them, the way you sit in their midst, how you wave at them and even visit them. Dear Governor, one of your lawmakers, Dare Pelemo has been accused of sexually molesting a widow and also allegedly beat her up for daring to question his authority. Please look into this sir, we also promise not to ignore your presidential ambition....

By the way, there is also a good news for Dare Pelemo, he might not know, but he who fights a widow fights GOD. Please go and read your bible ask your pastor or imam, you touched God, it's God that you fought! And He will definitely fight you back, except if you didn't touch her breasts... Only if you didn't!

A mother of three, Mercy Ilesanmi, who alleged she was sexually and physically assaulted by a lawmaker in Ekiti state, has sent a petition to the police commissioner Ibrahim Chafe.

International Federation of Women Lawyers (FIDA) in Ekiti has also demanded the immediate arrest and prosecution of the lawmaker Dare Pelemo on allegations of sexual harassment and physical assault on Ilesanmi, a widow.

Ilesanim’s lawyer Adeoye Aribasoye on Tuesday said a petition had been forwarded to the CP for appropriate action against the lawmaker.

Ilesanmi said she raised the alarm and condemned the alleged act but the lawmaker later allegedly mobilised thugs who beat her and tore her clothes as she went to the office of the Majority Leader, Tunji Akinyele, where she had gone to lodge a complaint on the alleged sexual harassment.

"I came to visit the honourable member representing my constituency, Hon. Samuel Omotoso but I met his absence.

"On my way out, I met Hon. Dare Pelemo and we exchanged pleasantries. Immediately, he fondled my breasts and I asked him what was the meaning of that, I am a married woman for that matter and I don't like how he touched my breast.

"He now said that I am an enemy of government, that I do not suppose to come to the Assembly. I now asked him that, is that the reason why you are touching my breasts, a married woman for that matter? I challenged him that Pelemo, that one is too much for you.

"I went to report the matter to Hon. Akinyele and I met the Clerk in Hon. Akinyele's office with two other visitors with him. He was on phone but I waited.

"Before I knew what was happening, Pelemo came in with some miscreantsand they started beating me, destroying things in that office asking what am I doing  in the House of Assembly complex that I am not supposed to be there, that I am an enemy of government."

The victm's lawyer said, "We have written a petition on the brutality and sexual harassment to the state police command and it is already receiving the attention of the Commissioner of Police.

Aribasoye said: "We have written a petition on the brutality and sexual harassment to the state police command and it is already receiving the attention of the Commissioner of Police.

"Besides, FIDA in Ekiti is also investigating the case and I believe that very soon, an action will be taken on the matter."

FIDA legal officer in the state, Kemi Atitebi, disclosed on Tuesday that the body received a complaint of sexual harrassment and assault of Mrs. Ilesanmi against Pelemo but the legislator shunned the invitation to come and defend himself against the allegation.

"The woman is a widow and mother of children and her dignity has been violated for the fact that she was stripped naked. FIDA strongly condemns any form of assault against women in the state.

Palermo did not answer several phone calls to his mobile line and has also not responded to text messages sent to him.