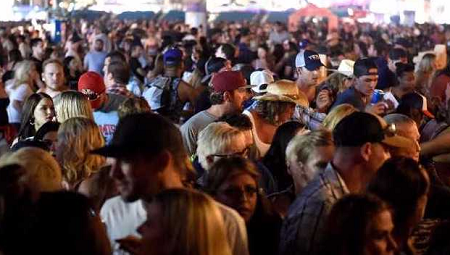 More than 58 people are dead and around 400 injured at an open-air country music festival in Las Vegas in the deadliest mass shooting in US history.

Terror spread through the city's famous strip as 64-year-old gunman Stephen Paddock launched an attack from the 32nd floor of the Mandalay Bay Hotel and Casino, unloading hundreds of rounds of ammunition from a cache of weapons towards concert-goers.

Police confirmed the attacker shot himself dead just as a police SWAT team burst into the hotel room from where he sprayed rapid fire on the crowd for several minutes.

Described as a "lone wolf" who lived in a remote desert retirement village, Paddock was holed up with more than 10 guns after he is believed to have checked into the hotel on Thursday.

The attacker's motive is unknown, but police believe he acted alone. They said he is "not believed to be connected to any militant group" despite a claim of responsibility from Islamic State, adding: "We have no idea what his belief system was."

His brother also said he showed no sign of depression and not sure he was connected to any militant group and says he is dumbfounded about the whole act.