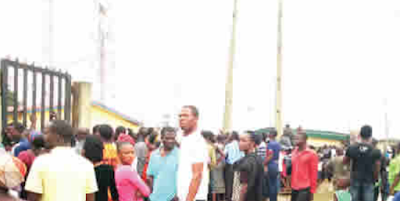 A large number of residents of Mowe, Ogun State, nearly lynched a middle-aged man on Thursday after he was allegedly caught with a human skull and other body parts.

It was gathered that the man, who was beaten up by the mob, was rescued by policemen from the Mowe Police Station, who took him to the division.

Within a few minutes, the station became a ‘tourist centre’ as news filtered into the community that the man was being kept at the station.

Policemen at the division were almost overrun by the crowd, some of whom climbed the fence to catch a glimpse of the human parts, which were stuffed in a sack.

Punch Metro, during a visit to the division, also saw the unidentified man and the body parts in the sack.

The police later ordered the suspect to bring out the parts, before ordering him to return them into the sack.

It was learnt that some residents had accosted the suspect with the body parts, after a driver raised the alarm.

Findings by our correspondent, however, showed that the decomposed body parts were that of the owner of a plot of land in the Arigbawonwo community.

He had been buried on the land by his family members, who later sold the land.

The new land owner, however, exhumed the body.

The suspect was reportedly contracted by the deceased family to help them to relocate the body.

“The parts were that of the first owner of the land, who had been buried for about 10 years in the land. When the land was resold, the new buyer just exhumed the body and threw it somewhere.

“The suspect was contracted to pack and re-bury the remains. He put them in a sack and got a cab to convey him to where he intended to dispose them of.

“The suspicious cab driver raised the alarm, stopping abruptly on the way. Residents and passersby opened the sack and found the remains.

“They pounced on him because they thought he was a ritual killer.  He was about to be lynched when the policemen rescued him,” a community leader, who spoke on condition of anonymity, said.

Punch correspondent later sighted a relative of the suspect talking with the Divisional Police Officer.

When asked why the suspects didn’t involve the police in the disposal of the corpse, the relative explained that the suspect never thought that the matter would assume any crisis proportion.

“He is my brother. The family of the deceased contracted us to dispose of the body. But they didn’t say we needed police clearance,” he added.

He said, “The man was caught with some human parts and was about to be lynched when he was rescued by the police.

“He has been transferred to the Anti-kidnaping and Anti-cultism Section of the State Criminal Investigation and Intelligence Department, Eleweran.

“However, he claimed in his statement that the corpse was that of a relation and he was going to re-bury it when he was caught. He is being investigated.”