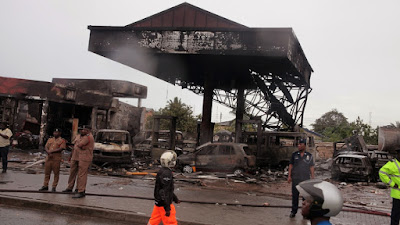 In the wake of the Atomic Junction gas explosion, the construction of petrol/diesel and LPG filling points, is to cease immediately until further notice, the Ghanaian government has stated.

This directive formed part of nine safety measures outlined by the Presidency after a cabinet meeting.

A statement from the government noted that, President Nana Akufo-Addo has ordered the “immediate cessation, until further notice, of all construction of facilities intended for use as gas or petroleum retail stations.”

The directive follows the massive explosion at an LPG filling station at Atomic Junction that has so far claimed at least seven lives and injured over 100 persons.

Hours before the cabinet meeting in question, the Association of Oil Marketing Companies had appealed to the government to undertake a thorough examination of the Atomic Junction Gas explosion before coming out with any national policy on fire outbreaks at the pumps.

The aftermath of the explosion has seen protests against the siting of fuel stations deemed inappropriate because of their proximity to densely populated areas and commercial centres.

But the OMCs urged the government not to succumb to panic reactions from a section of the public, but come out with a holistic policy.

The government has not made any definite declaration of the siting of fuel stations, but has ordered the deployment of a task-force to assess the risk that “LPG infrastructure poses in terms of public health and safety” withing 30 days.