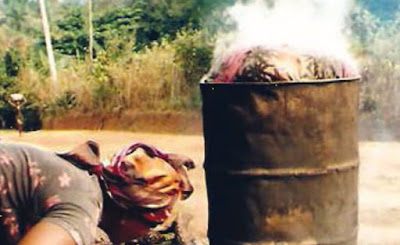 The judge, Alhaji Abubakar Sadiq, who convicted Alhassan, advised him to “learn to control his temper.”

Sadiq, who advised the convict to desist from committing crimes in the future, added that the sentence would serve as a deterrent to other would be offenders.

Alhassan, who resides at Karmo village, was convicted on a two-count of criminal intimidation and causing hurt.

The convict, who pleaded guilty to the charge, begged the court to temper justice with mercy, saying that he did not know what came over him.

The Prosecutor, Florence Avhioboh, had told the court that the victim’s mother, Mrs Safiya Mohammed, reported the matter at the Karmo Police Station on Oct. 16.

Avhioboh said the complainant said she sent her daughter to dispose waste at the refuse dump when the convict started intimidating her.

The convict, who was said to have threatened to kill the victim and her entire family, made good his threat and poured hot groundnut oil on the girl.

Avhioboh said during police investigation the convict confessed to the crime.

The prosecutor said the offence contravened Sections397 and 253 of the Penal Code.