Knifeman Stabs One To Death, Wounds Seven Others In Rampage At Polish Mall 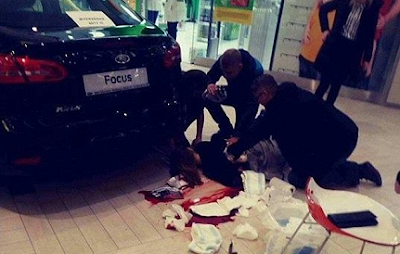 One woman is dead and seven others are in hospital in Poland after a man attacked them with a knife at a shopping mall.

A 27-year-old man has been detained after the attack in the south-eastern city of Stalowa Wola.

The man entered Vivo shopping center at around 3pm local time and started stabbing people in the back, police say.

He is a resident of Stalowa Wola believed to be named Konrad according to reports.

Eight people, including the woman who died, were taken to hospitals in Stalowa Wola, Tarnobrzeg and Sandomierz.

Six of the seven people injured in the attack have serious wounds, police said.

Police officer Anna Klee was quoted by the PAP news agency as saying the weapon was a knife and a 50-year-old woman died in the hospital.

'He was attacking people from behind, hitting them with the knife,' Klee told PAP.

Witnesses described him as a 'madman' who was 'stabbing blindly' at other shoppers in the mall.