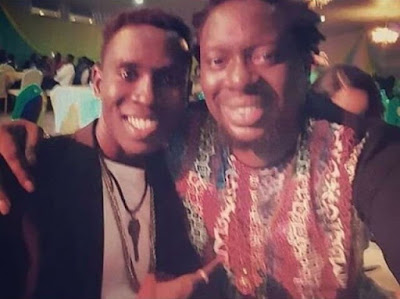 A comedian Prince Neche has called out Klint Da Drunk for refusing to help him after promising he would help him a year ago. According to Neche, Klint promised he would bring him to Lagos and ensures he blows, but that never happened and it's already a year. The comedian is however fed up, because he has remained on the same spot he was, despite a year passing by. He therefore took to IG and Facebook today to inform the world and also plead with Klint. But what the young man has forgotten is that, Klint might also be fighting his own BATTLES, abi people? He might now, but then he should have at least replied him yea? But then no vex brother... your news don dey sell small small now. We don know you small. Oya begin instagram videos.... Continue...

I woke up this morning with a very heavy heart today makes it exactly one year since klint da drunk made this post on instagram that was on that day when he came up stage at marble arch to lift me up owing the awesome performance i had put up. One year later ucle still no dey pick my call, and the heart breaking thing is i know he has my both numbers on his phone cos can see he whatsapp stories, he doesn’t reply my whatsapp stories, he doesn’t reply my whatsapp nor text message and it gets me wondering, why gave me such huge hope if you wont come through for me? he’s not the only ‘A-list’ comedian that has promised to help me but didnt but at least he went as far as posting me on his instagram page and it’s still there till today, you know there are alot of reasons why i feel like quitting its not like i got less creative or less funny, instead my creativity became sharper but then no significant changes and i most tell you that it hurts . the way this story made news, a lot of people including myself didnt believe that i would still be on the same level one year later but then here i am infact i dont even know what else to say…. Dear lord my life and career is in your hands, do with it what ever you want

I just saw this picture on my facebook history, and it struck me that today makes it exactly one year you made me this promise.

Remember that boy you called an “Amazing Young Talent?” I am still here sir even with sharper creativity. I have been working extra hard this one year to make sure I don’t disappoint you when I come. I AM READY SIR.

I am still looking up to you to come through for me.

Help me tag him 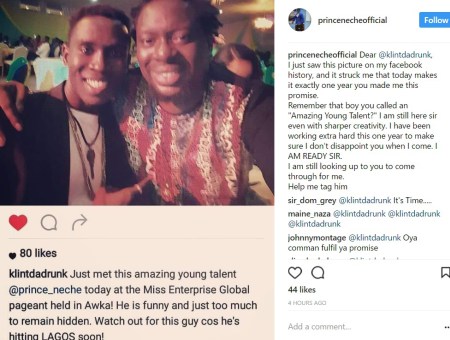